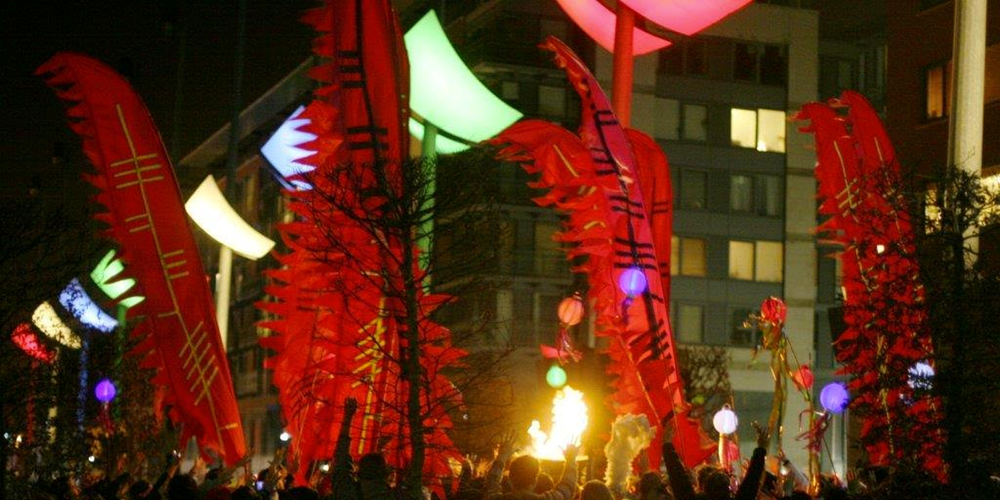 Slí an Chroí Holistic Centre and Smashing Times Theatre Company, supported by Grangegorman Public Art and Dublin City Council, are delighted to announce the 8th annual City of Dublin Winter Solstice Celebration Festival. On Thursday December 21st the indoor section of Festival begins on Grangegorman Campus followed by the colourful Parade of Light which winds its way to Smithfield Square culminating with the great Fire Ceremony. This annual Festival was first created as a response to the economic downturn and a dearth of  events  on  the  Square.  Kieran Finnerty of the Dice and Mission Bars issued a call for action from local business people to highlight the lack of support for  the  community, infrastructure and other social issues and John Cantwell and Karen Ward of Slí an Chroí responded with the first Solstice Ceremony attended by 70 people in the snowy weather of 2010. As a founding sponsor Kieran has been joined yearly by the North Inner City Network and Christophés plus many SSBA members to fund this gem in the crown of our business community. John and Karen have teamed up with local Smashing Times Theatre Company to ensure that this heart-warming event returns annually with crowds of up to 1,500 people. It is the support of the SSBA community that continues to be the beating heart of this feel-good event.